I have a very exciting author interview with Kellyn Roth today, in celebration of her new release, Beyond Her Calling! Let’s jump right in because you’re going to love this! 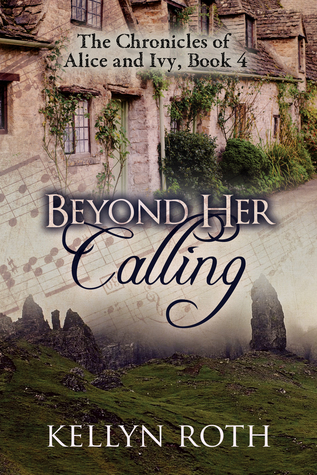 At twenty, Ivy Knight feels as if she hasn’t accomplished anything of worth. Her life stretches on before her, empty and pointless. Though her faith in God and her mental abilities have been strengthened, she still doubts herself. Does God have a purpose for a socially awkward, often confused and frightened young woman?

Jordy McAllen has just returned to Scotland after his education in London. Though he has accomplished a lot for a farm lad such as himself, he fears that what everyone has always said about him may be true: he won’t really make a good doctor. Determined to prove himself, Jordy snatches up the opportunity to become the doctor in the village of Keefmore near his parents’ farm.

Helping Jordy with his work at Keefmore seems like the perfect opportunity for Ivy. Still, she doubts herself. Is there a purpose to Ivy’s life?

Kellyn Roth lives on an Eastern Oregon ranch with her parents, little brothers, border collies, cats, and a few dozen cows and chickens. Always a lover of a good story, and especially of telling one, she’s been writing since she was seven and published her first novel at fourteen. Now a homeschool grad, she divides her time between penning her next Christian historical novel, creating professionally silly articles at kellynroth.blog, and her actual life. Actual life plays second fiddle sometimes, though.

Character Interview (Ivy) // Jo @ The Lens and the Hard Drive

Enter the giveaway to win a signed paperback copy of Beyond Her Calling!

While writing Beyond Her Calling, which character could you strongly relate to?

Honestly, I didn’t relate greatly to Ivy or Jordy. Both of them were loosely based off two of my friends (in real life), and neither of my friends are very like me – nor are their struggles. Jordy is a bit more like me in thought process, though, hehe.

I probably related most strongly to Ena Owen. Ena and I deal with grief in the same way, for one – we get really upset, then we’re mostly okay with it afterwards. We’re both no-nonsense with children, as well, though not without leaving room for creativity (as long as it’s within reason, haha). And I like to think I’m a wise as she is. *gives the rest of the world a condescending glare*

As an historical fiction author, what kind of research do you do, and how long do you research before writing your story?

At this point, I’m honestly just researching a few specifics related to random things for each story and leaving the rest to chance/my former knowledge of the era. When entering a new era, I’ll read a combination of books (fiction and nonfiction) about it or written during it, do a ton of Google searches, ask a gazillion questions of my history nerd (meant as a compliment) friends, etc. But by now, I really understand the Victorian era fairly well.
Also, I don’t do a ton of research prior to writing. I like to begin my research in the 2nd or 3rd draft – especially since most of what I need to research are little details that don’t matter at first. (I suppose when people ask me the plotter vs. pantser question I should say, “Plotter … up to a point.” 😉
For Beyond Her Calling, I did some research on medical degrees, bipolar disorder, and regions of Scotland then watched five YouTube videos/read a couple blogs on Scottish accents while writing and called it good until the second draft!

What was the most difficult thing about writing Beyond Her Calling?

I’m very tempted to say the Scottish accents. Those were hard to pin down! How much do you write? Is the dialect correct for the region? Will the reader even be able to decipher what they’re saying? It was a delicate balance.
But I think it was also very hard to portray a grownup Ivy. At least, it took me a while to pin it down!

Do you write each novel as a standalone, or do you feel the series could be more appreciated as a whole?

My goal with my stories – all of them! – is to write novels that a person could pick off a bookshelf, regardless of what order, and enjoy. I think the books before it and even after it will deepen peoples’ understandings of the characters, but I think the books can be equally enjoyed as standalones as they can as series.

When your readers finish Beyond Her Calling, what’s one thing you pray they take from the story?

A desire to read the next book by me? 😉
Seriously, though, I hope they take away that everyone is valuable and beloved by God and everyone can succeed at whatever they put their mind to IF they’re relying on Jesus Christ as their strength. But … our plans may not be His, of course, and we need to accept that (as we found out in At Her Fingertips).
In truth, I’ve been enjoying exploring different aspects of God’s plans for us in this series! It’s a heavy theme, but it’s not a particularly dark one, which is a nice as the next two books in The Chronicles of Alice and Ivy will feature some challenging topics, including but not limited to adultery, miscarriage/stillborn children, suicidal thoughts and extreme depression, and the forgiveness and/or healing aftermath. Let’s just say I have my work cut out for me if I’m going to portray these in a Christ-like manner!

If you’re interested in Beyond Her Calling, I will tell you it is one the sweetest books you’ll read. I definitely enjoyed the characters and setting!

Thanks for stopping by, and be sure to visit the rest of the blog stops!

HAVE YOU READ BEYOND HER CALLING? DO YOU WANT TO? IT IS ALMOST CHRISTMAS, SO BELIEVE ME, THIS IS THE PERFECT GIFT!

7 thoughts on “AUTHOR INTERVIEW | BEYOND HER CALLING by KELLYN ROTH”