If you’re wondering why I’ve been MIA on the blog, an explanation will be at the end of this review. But let’s get straight to the review and fangirling. This review will be longer and more emotion-filled than the Goodreads rating… because it’s my blog and I can do what I want and do it to the EXTREME.

PS. That knife in the photo? My 15-year-old brother, Kody, made that all by himself. It matched the cover. *heart eyes* 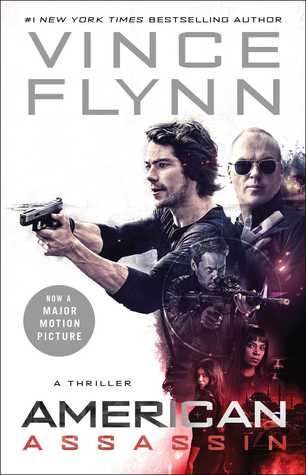 American Assassin is one of the most enjoyable, thrilling, fast-paced novels I’ve ever had the pleasure of reading. And even if I am a writer of thrillers, I can rarely bare to actually read a lot of them. Mostly because they drive me insane. I found this book in the sale bin at Books-A-Million and, after my fangirl attack, bought it without a second thought. Why? Because I’d seen the movie and was certain the book had to be better. I was right.

AA follows more than one character throughout the nail-biting journey, but it never felt rushed, and I didn’t get confused with the good guys or bad guys. The motivations, plots, subplots, you name it, it was clear and didn’t bog you down. I was swept away in a story that surpassed my exceptions.

There were only a few times where I really had to think about what was going on, and those were in the right places. The places where you were supposed to stop, think, and understand. That’s the point of thrillers. You’re given enough to understand and formulate. You aren’t supposed to be lost at a sea of confusion or bogged down with too much information.

There were typos and spelling errors and small things like that, but it wasn’t hard to ignore (especially since I read Dee Henderson novels, ha).

I was quite eager to find this novel. I’d watched the film a year earlier, and rated the movie a solid 3.5 stars.  I was quite certain the book, as usual, would be better. And, goodness, was it better. I can’t quite fathom how the movie could fuddle so much.

This book had me cheering more than once. Why? Because the blatant line between good and evil. It is tiring to see mainstream media focus on moral grays, and condemn those who believe there is evil and there is good. American Assassin is a novel that shows the gritty, absolute horrors of war that are going on today. It shows the corrupt governments, Russians, Muslims, etc, without sugar coating anything. Without being biased.

Evil was shown, but so was good. And, miracle of miracles, God was in the novel, and He wasn’t some foreign bearded man they all laughed at!

Mitch Rapp is a Catholic, and when asked how he justified his motivation for justice, there is a great scene where he explains that merely using the New Testament’s “turn the other cheek” is dishonest, as the Old and New Testaments have many verses that explain why evil men should die. This message throughout the novel is one I think many people, Christians as well, utterly disregard.  Christians want to take Jesus’ peaceful teachings and say Christians shouldn’t fight, shed blood, etc…

And that’s not the case. God is a God of HOLY JUSTICE. Jesus told His followers to carry swords at times. GOD told men to go and kill unholy people at times, as well. Murder and killing are two different things. SO YEAH, this book didn’t sugar coat the truth between good and evil, nor did it shove theology down your throat.

I’d also like to note Hurley’s relationship with God.

Without giving away spoilers, the man is coming to terms with death, and he talks to God. He asks forgiveness for the good men he killed. He didn’t ask forgiveness for the evil men he killed. I think this, too, is something to be pointed out. In the Bible, many men killed—and God blessed them. Now, I’m not saying Hurley was blessed or anything, but nowadays, we honestly forget God’s Word about killing wicked men. It is not something to repent over if God calls a person to do that. Hurley being such a war-primed, crazy man and still acknowledging God as existent was just refreshing for me.

While this novel was by no means a ‘Christian’ or theological novel, it held a lot to chew over. It was a realistic book and thus, the topics of moral questions couldn’t be avoided, but were handled with taste.

The antagonists of American Assassin are, simply put, greedy, evil, and terrible men, but they were not comic-book villains. They were extremely 3-dimensional, motivated, and getting inside their heads moved the book along instead of slowing it down. It also showed how even greedy, wicked men think they are in the right. And if they don’t care one way or another, they aren’t always the type to laugh that Disney-evil laugh and chop off your head. I really enjoyed the bad guys in this book. It was so intense.

Mitch Rapp was a intriguing, well-rounded main character. Strong motivations, skilled, sense of humor—he really lived up to expectations. There were times when I would have loved to see more reactions from him, however. The times we saw him act and speak really stood out, and to get a bit more of him like that would’ve been nice. So, yeah, not my absolute FAVORITE main character, but that’s just because I’m picky, and I still gave the book 5 stars because he was still cool beans.

ALSO HIS MARTIAL ARTS SKILLS made me so proud. If it’s one thing that makes a book, is showing how martial arts is, for lack of a more gentle word, better than boxing… Haha.

Hurley is one of my favorites. He made me laugh more than once. (DORFMAN SCENE, ANYONE?) And I just loved the jerk from the start, as strange as it sounds, and he didn’t disappoint. I wish I could explain WHY I loved this old man but I can’t so ASBJFSBJD. AHHH. DUDE. This book never dwelt much on his relationship with Mitch and/or Richards, but it was THERE.

As for ‘side characters’, Richards and Lewis were my favorites. Richards was hilarious (his constant ‘whys’ and ‘We’re Sherman’? had me in stitches). On that note… my reaction to the ending of the novel with Richards was:

Just… Richard. He was amazing through the whole thing. I loved him. He’s mine.

Lewis was a great guy, even if he was a shrink, and I cannot fathom why these dudes didn’t make it onto the big screen. AND Lewis can cook? And wears leather? Like…

All of the characters were strong, motivated, and never let me get bored.

The movie was rated R, so that’s basically what you can expect from the book, if not more so (so 17+). Heavy cursing (if it’s a cuss word, it’s in this book). Brief to detailed descriptions of torture, blood, etc. A lot of vulgar talk, mentions of prostitutes, mentions of sex, a sex scene that fades to black. There was, of course, a lot of violence and on that note, the fighting/combat scenes/violence/martial arts were EXCELLENT.

For most of my clean, Christian readers, this probably won’t be a read for you. But if you can handle the above stuff and are used to the genre, this isn’t a book you wanna miss.

A thrilling read that I both wanted to put down and never stop reading. That’s saying something for me. It had me laughing, on the edge of my seat, and wanting to cry. I will definitely be using this book and the knowledge within as inspiration in the future. While Mitch appears in 15 more novels… I don’t know if my little heart can handle more stress… So I might not read more of the books… But who knows.

Also, I’d like to ramble about the ending some. Now, avoiding a HUGE spoiler, I have to admit, such a thing often will make me lower my rating on a book. I didn’t lower my rating because of how satisfying the end still was, even if The Thing happened. It really did have me cheering and considering all things, I allowed my rating to stay high. Even if my heart was broken.

NOW, for my explanation… I’ve been MIA on this blog (and social media in general, except Instagram) because we’ve had no Internet and, very long story short, my life has been flipped upside down. It’s been an extremely difficult past few months. I won’t be active till March, but I’ll have fun content for y’all then, so just be patient, yeah? 😉

Thanks for reading, God bless!

HAVE YOU READ AMERICAN ASSASSIN? DO YOU LIKE A GOOD THRILLER?