My dear friend and Indie author, Kellyn Roth, is releasing her novel Souls Astray today! The blog tour is going to be bundles of fun and I am honored to interview Kellyn, right here and now! As a beta reader, I gave Kellyn two promotional quotes about Souls Astray. Before we begin, take a look….

“Souls Astray contains characters who will tug your heartstrings, a story that engages on the first page, and leaves you hungry for more.” ~Angela R. Watts 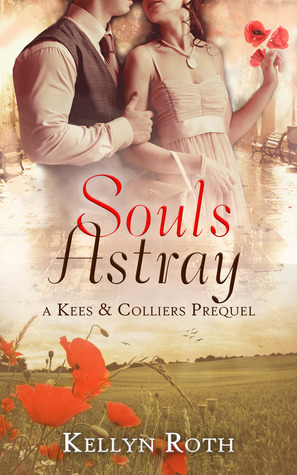 Adele has been lost for a long time now …

Adele Collier has sought a carefree lifestyle ever since her tragic childhood. Determined to never allow anyone or anything to control her life or emotions again, she consistently seeks distraction in gaiety. But shaking her ghosts isn’t as easy as she’d like.

Troy Kee has been alone in the world since the Great War took his parents and left him in care of his younger sister. When she marries, he’s left to seek after his goal of a healthy, complete family. But how can he focus on his dream when trouble plagues his family vineyard?

When Adele and Troy meet, a whirlwind romance begins—but can two lost souls have a healthy relationship?

Enter the giveaway to win a signed paperback copy of Souls Astray and a $20 Amazon gift card. Open to international entries. This giveaway will close for entries on the 11th of May, which means your followers will be able to enter even after the tour is over!

What started your passion for writing historical fiction?

Well, once upon a time, I decided I was going to write a book which I never named but which was a really stupid, cheesy romance. It was based off my favorite novel, A Girl of the Limberlost, which I’d just finished reading for the first time, and involved a crazy love triangle that turned into a love square (two guys fell in love with one girl and then a different girl fell in love with the second guy) and … wow. It was insane. (But Colin is still goals as far as “tasteful ways to approach a woman you are attracted to.” *cough* *people won’t get that*) And it inspired basically my whole The Chronicles of Alice and Ivy series (which is my other big historical universe) (even though you can find two small connections in a person and a place to the Alice and Ivy series in SA … I’ll give a free paperback copy to the first person who points it out to me).
But anyways, I started writing it late one summer night, and I remember running downstairs to where my mom was sleeping with the boys in the living room ’cause of the heat. I whispered, “Mom, what era is AGOTL set in??” And she said, “1910.”
Boom. Started writing historical.
Of course, I didn’t term it that until I explained one of my stories to a writing friend, and they diagnosed it as such! 😛

What makes Souls Astray different than your previous novels?

Pain. Like, really. The book is start to finish pain with very few breaks for Troy/Adele’s cuteness and Holt’s awkwardness and Harrington’s stoicness.

What was the hardest part about writing Souls Astray?

What do you think, m’dear? Do you think it was easy writing the inevitable?
We all know what’s going on in the first book in the series, TLOTV. Writing the prequel, writing the cute Troy/Adele scenes at the beginning of their relationship … it’s hard because I’m writing about a doomed couple. Which sounds dramatic, but you know it’s right. You know that this isn’t a romance.
I also struggled a bit with one of my least favorite tropes … insta-love. I HATE books that feature insta-love … yet that is exactly what Souls Astray had to feature. Because the point of the story is, well, if you fall in love with a girl based solely on her physical appearance, if you get caught up in nothing but a man’s charm and willingness to bend to your opinions, your relationship is going on a downward spiral. Give up morals for “romance”? Even worse!
So that was tough. I had to portray a bad thing to point out a worse one! But it took a while to get there, and both Troy and Adele were caught up in the “inevitability” of their relationship in the meanwhile. Ugh. Get a brain, you two!

How do you celebrate a book release? (You definitely deserve a big celebration!)

*coughs* Well, normally I just … work really hard on blog posts … and work really hard on making sure everything goes all right … and um …
Yeah, I won’t do much. I’m writing this interview ahead of time so I’ll say launch day plans in future tense: sister is coming with her family, and my mom has a birthday including a birthday party. I’ve never been a big “celebrate launch day” person, haha!
I actually have a couple indie books from my favorites arriving from Amazon on launch day, haha, sooooo???

What is one message you hope readers will walk away with after reading Souls Astray?

Brother-in-laws are evil.
Wait, no, that’s what TROY wants you to take away from SA. What I want you to take away is … don’t rush into romance and listen to God. LISTEN TO MCFRICKEN GOD THE CREATOR OF THE UNIVERSE AND YOU AND THE PLANNER OF YOUR LIFE.
God says not to be unequally yoked? Don’t marry a non-Christian. God says to stay married? Stay married. God says to be faithful? Be faithful. God says to treasure children? Treasure children. God says you’re one with your husband/wife? Be one. God says marriage is between one man and one woman? Follow the model (or remain celibate).
And that’s just stuff in the Bible, not stuff He’ll show you about your personal life!
So yep. I care very much about people bringing God into their lives, as evidenced by some of my other books, but I believe this book has the most “listen to God when you’re thinking about marriage you whackadoo” theme of them all. 😛

Thank you for an amazing interview, Kelly, and I agree vehemently about listening to what God says. It’s a bold move to write a novel that speaks strongly of the truth. Rock on!

Review & Interview with Troy and Harrington // Amie W. @ Crazy A

Interview with Adele // Michaela Bush @ Tangled Up In Writing

Review // Hannah Gridley @ The Heart of the Rose

Guest Post by Troy // Liz Franklin @ Home with the Hummingbirds

Minor giveaways, excerpts, links, and more will be posted throughout the week.

I had such fun interviewing Kell and yes, I’ve read Souls Astray as a beta and I’m ecstatic about it being PUBLISHED so I can buy a pretty copy! 😀

Be sure to follow Kell and check out the tour.