PAPERBACK IS AVAILABLE! You may now get a copy of this bad boy in your hands so you can hug it, chunk it across your room, etc. The blog tour is about halfway through and going fabulously. Thank you so much for joining us! 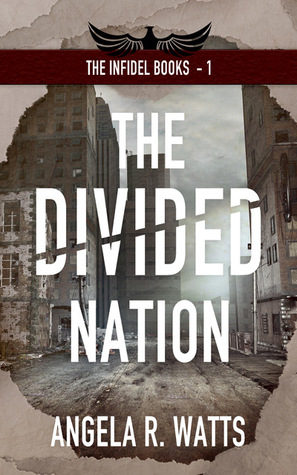 WHEN THE NATION DIVIDES, THE INFIDELS MUST RISE.

The United States has fallen. Three years after the 2024 presidential election and the declaration of martial law, the nation is at war against itself. Gangs battle, civilians struggle for survival, and officials of the United Nations  thrive. West Johnston, heir to the most powerful ganglord in the country, refuses to continue the family legacy. But, in order to defeat his father, he must become him: bloodthirsty and willing to do whatever it takes for control.

West gains control by helping fellow gangsters, Nate and Simon, when they form an alliance with one of the last remaining townships in America. After years of surviving and winter fast approaching, Springtown is in desperate need of supplies from the two teenagers. When the town leader’s daughter, Rene’, is kidnapped by an unknown rival, Nate and Simon risk their reputations to save her and the town they now love. But without help from West, their rescue mission will fail.

Told in multiple bold, abrasive narratives, THE DIVIDED NATION steps into a future where brotherhood bonds must be stronger than iron to survive a broken world, and faith without courage is dust in the wind.

US shipping only. If an international winner is drawn, they will receive an ebook only.

1st place: hardback copy of The Divided Nation. A custom mug with a quote from the book, bookmark, and an exclusive snippet from The Infidel Books.

Author Interview @ Taking Up My Cross

I had a BLAST being interviewed by my dysto loving pal, Eva!

Merie is a fantastic friend and I ADORED watching Gideon respond to her questions. Chaos ahead!

Another FANTASTIC interview, though I’m not sure if the character isn’t still traumatized… *spoilers*

My dear friend (and I met her at Realm Makers and we had a BLAST) shared about TDN on her blog! Give her a follow!

I had the honor of guest posting for Jaye L. Knight. I met her at Realm Makers and she is officially a huge inspiration, y’all.

A great review from Kaitlyn (who has a book coming out, so give her a follow)! It’s funny, I actually tackle one note she gave about faith in this post. 😀

Author Interview and Guest Post @ Tangled Up In Writing

THEMES IN THE DIVIDED NATION

Freedom. What if our America as we know it changed for worse? What if our rights were stripped, abortion was acceptable, sex trafficking was pushed under the rug, and the country was split in two? OH, wait. Kinda already happening, huh? That’s why I chose to set this novel in 2027 instead of 2098. This country as we know it is already dividing but we try to push this away, tell ourselves we have time, or even tell ourselves it is all hopeless. “God’s in control,” we say, “we don’t need to fight!” So, I wanted to show a book where freedom is valued because it is lost, and men die for freedom because they don’t want to live on their knees.

Forgiveness. What if your brother, a hero of the nation, left you for dead? What if to save a young woman’s life, you had to give her to a man who would torture her? What if to protect innocent lives, you had to kill? You might not realize it, but each of these questions have something in common. Could you forgive your brother? Could you forgive yourself? The Divided Nation has characters who struggle hard with forgiveness. Some even fight forgiving God. I wrote this novel to show that while forgiveness doesn’t come easy (or maybe doesn’t even get solved in book one), life is hard to trudge through with that burden on your back.

Loyalty. The loyalty that comrades have has always fascinated me. To be that tightly bound to someone who isn’t your own flesh and blood? What kind of trust does that take? The Infidel Books are full of loyalty and deception, love and hate. Many of the characters in this novel are loyal to a fault… so in a broken world where loyalty gets you tortured, why? And the characters answered for me. Without having someone to watch your back, there’s not much point of keeping it off the ropes.

Courage. Courage is a pretty strong theme throughout this novel, but for different reasons. Some characters are courageous, simply because they must be, and logically, see no reason not to be. Some characters are cowardly or too weak to be “courageous enough”. Some characters are courageous for Christ, knowing they can get killed for their faith but loving God anyway. In today’s world, Christians are being slaughtered overseas, but American Christians ignore this. I wanted people to stop and think about the reality that it can happen here. And, truth be told, until you have faced the barrel of a gun, none of us know if we would denounce our Savior or not.

Revenge. Revenge isn’t a theme anyone can root for, but it’s a theme in the series because humans are vengeful little beasts. God says vengeance is His, yet, is there a difference between justice and revenge for us humans? Lots of characters in The Divided Nation think so, but some don’t care and prefer revenge. Revenge will play a key role throughout this series so introducing it in book one was quite fascinating.

Faith. The Infidel Books is full of nonbelievers who have faced hell and came back silent instead of screaming. The Infidel Books also contain Christians, men and women who have seen terrible things but still trusted God, people who have died for their faith. I wanted to tackle the topic of faith in different ways, because no one is saved the same way. I didn’t want to preach or write it all too subtle to notice. Why? Well… Some people need a preacher to explain Jesus to them. Some people need a close friend to just give them a wake up call. Some people are tough sells and will refute all faith, no matter what miracle they see. But every person needs God to save them, no one else, nothing else. These people are all in The Divided Nation! I had characters “preach” in this series and I had characters silently love their brother without trying to get them to understand God. And these themes will continue throughout the story. Faith isn’t preachy, even if people can preach about it, because faith is truly about love. And love must be found by a soul individually for themselves.

I hope you enjoyed this little post. I’m probably forgetting more themes… but I guess you’ll have to read the book to see.

4 thoughts on “THEMES OF THE DIVIDED NATION | BLOG TOUR, DAY 4”